Many A:M-User think, that A:Ms renderer is quite slow compared to Mental Ray and other renderers. That is just not true.

The difference is, that A:M uses quite complex render settings by default while for example XSI starts with render settings which are very simple and add more complex calculations step by step where needed.

In the following article you will find some of the most render time increasing options in A:M and how you can create very equal effects with only a fraction of the rendertime.

By default XSI does not use any shadows at all.

If you create a light in A:M it will have a raytraced shadow from the beginning. Using that kind of shadow will increase the rendering times quite much, especially if you want soft once.

My advise: Use very few lights which are producing shadows. In many scenes you only need one light and that does not need a raytraced-shadow. Use a z-buffer shadow instead.
This shadow type is only available using a Spot-/Klieg-light in A:M. So use that kind of light to create the shadows. It will although create soft shadows without a big renderhit.

Brightening up using lights only

In some books it is suggested to use many spot-lights with a high fall-off to lighten up your scene. I say: Use the Global Ambiance-Option you can find at any chor.
This looks in a few situations a bit less cool but it will save you rendertime and looks well under most circumstances.

Most of you know about the Global Color option in a chor from Ambient Occlusion renderings. But you do not have to use that with occlusion at all. Just leave the occlusion value at 0 and deactivate AO in the render settings. Use a z-buffer shadow light and maybe a few specular-point lights where only the specular-influence is activated instead.

XSI has a default ambiance value.

One of the most important rendertime hits are raytraced reflections in combination with transparent objects. I suggest: Be VERY careful with the reflectivity value and whereever possible leave it at 0 if you are using transparency too.

My advise: Use an environment-map or the environment-shader with for instance an image of a bright stripe on a black background.

You will not regret that. In most situations you will even get a better looking object than before.

Do not set the reflection value in the render settings to a higher value than 1 or 2 if you not really need it. You will only need a higher value, if you are rendering for example a mirror in front of a mirror.

If you NEED to use raytraced reflections so, I recommend to use the fall-off value. It ignores distant objects which gives A:M a limit where it can stop the calculations. Quite useful too.

XSI does not use this by default neighter.

Transparency itself will not increase rendertimes in a huge way. If you use an index of refraction other than 1 or you combine them with reflections it will.

Some people think, that you can not create glass wihtout an index of refraction value. I think that is not true.
Have a look at the translucency value. It defines how much of the base-color of your object / group is used.
Density will define, how many layers of an object will be shown transparent. Play with these settings and you get a nice looking glas without a very high hit on rendetimes.

Add an environment-map and you are ready to go!

This is deactivated by default in XSI too. 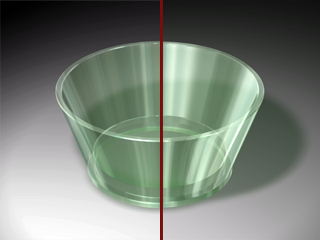 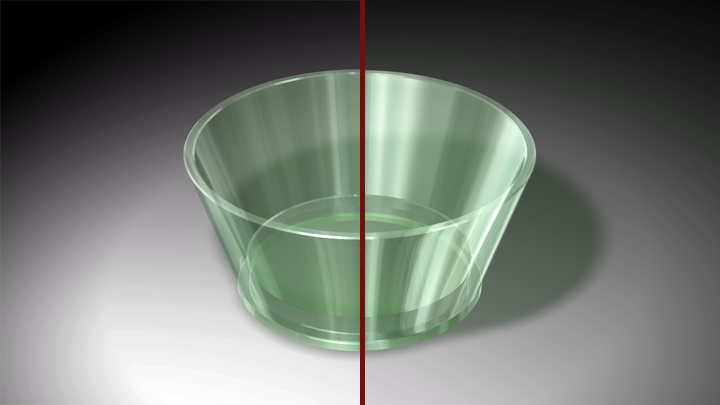 Which one is which?

As you can see, both materials look quite well.
One is rendered with an index of refraction and reflections, one without. Both use an environment-map.

The render time difference is very noticeable. At 720p resolution and 3 passes:
- with these rendermethodes: about 1.5 Minutes
- without: about 0.5 Minutes

Please keep in mind: For one image, A:M uses only one core!

To make it easy, many people use Ambient Occlusion. That looks very nice but increases the rendertimes. In newer versions of A:M there is a good alternative called SSAO (Screenspace Ambient Occlusion) which renders much faster (especially because it can even be calculated by the GPU, if your graphiccard can do it) in A:M.

My advise: Use SSAO or Global Ambiance and a spot-light with z-buffer shadows. That looks quite good too and will render many times faster.

BIG mistake. That is not a normal pixel-resolution or something like that. It only says, how many times a possible shadow-area is subdivided using its size.

So if you use a shadow which is not very large in size or which does not go very far in the depth of the image because it is a small object or the object is lit from above: Do not change the map-resolution to a higher value. That does not increase the quality.

In most situations a map of 512 x 512 resolution is enough.
Wait till you really see pixelized shadows before increasing the map resolution.

And there are the other settings of z-buffer shadow which may help you to not increase the resolution. Play with it. It can save you many minutes and even hours of rendering.

The good thing about patches is, that they are resolution independent. But that does not mean that you should create too large patches or that you should go too close to a patch with the camera.

You need an extrem closeup? Use a few patches more there (but do not exaggerate it).

That can help very much for certain situations regarding the rendertimes.

It is quite easy to understand: The larger the patch, the more precise calculations are needed to create the surface. The more digits after the comma, the longer the rendertimes.