Some time ago, I have bought myself a home server. That piece of technology was interesting because of two things:


I could have bought a simple NAS, but I wanted something with 4 drive slots and Windows OS, since I wanted to run A:M Netrenderer (works great) on it and wanted to be able to just pull the harddisc out and plug it to my Windows computer to secure the data.
I was not really deep into homservers (and still aren't) when I bought the Acer easyStore H341 Homeserver with Windows HomeServer but in the end I have not regrad the purchuase. 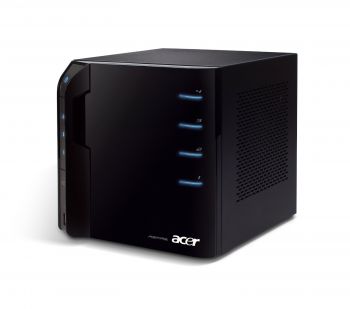 The biggest problem I have faces was the performance. Some time after starting the home server the network harddisc started to slow down massively.

But today I have fixed the problem. Now I finally got what I wanted to get.

The quite slow Atom processor in the device is just not very well suited to handle different services at the same time. But since I only need it to run as a file server I just got rid of everything on it. Including the iTunes-Service and many other stuff. The only thing I left on is the backup service. Now it runs very very smoothly.

All that increases the speed massively! So if you really do not need those services: Deactivate them!

The write speed may not be suited to edit high definition videos directly on the system, but with write rate of 40 MB/s and up it really is fast enough for anything I need in the 3d graphics department.

If you are a A:M user and you only need it for those thing I told you about: You can buy it without a doubt if you get rid of the services you do not need...