Petition Windows 10x for the Surface Duo: Now at 5000 signatures 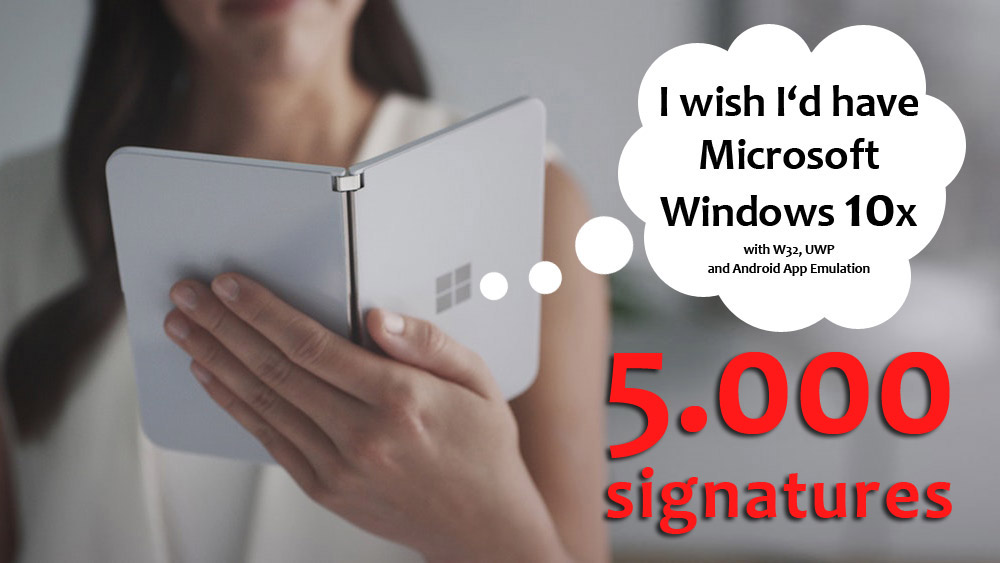 As many know, the Surface Duo is expected to be shipped with Android. Of course, die-hard Windows fans and privacy-sensitive people don’t like this at all - once Google is in, data theft is almost impossible to get out.

Now a milestone has been reached:
5.000 signatures were collected to get a version of the Surface Duo with Windows 10x instead of Android.

We don’t know how much a Surface Duo will cost, but it won’t be under 1,000 Euros. So if only these 5,000 people would buy such a Surface Duo with W10x, this alone would amount to 5 million Euros. It’s more likely that many more people would buy such a device, because change.org is probably signed by enthusiasts. So at least 10 times the amount is not too high estimated, I guess.

So that would be 50 million Euros just to install an already existing and in-house developed operating system for the Surface Duo on its little brother (the Surface Duo)? That should be a certain incentive for Microsoft to release at least a small special series and who knows what I will develop from it? :)

If you want to sign additionally - so much the better:
https://www.change.org/p/panos-panay-satya-nadella-panos-satya-give-us-a-microsoft-surface-duo-running-windows-10x