Surface Neo and Duo: We both should get Windows 10x

What a great surface event it was. Many great product refreshed, some whole new product groups and also new form factors were there.
The presentation was very, very nicely done... with fun, feeling and a fat surprise moment.

And at the end a real highlight: The Surface Duo is the first Surface "Phone" (or something very similar... because actually it is more than a simple smartphone - or at least it could be if it would come with the right operation system... more later...)

There were also interesting news about the software:
The Surface Neo is delivered with Windows 10x, a specially adapted Windows version for foldable systems - a new Windows based on Microsoft’s Core OS, which is supposed to become the slimmest and fastest Windows of all time with modularity and purification, but which nevertheless should be able to run classic Windows 32, UWPs and PWAs natively. These elements can be switched on and off by the layer structure of the operating system - depending on what is currently needed.

Then came the biggest, unexpected news:
Also the Surface Duo (some may still know it as Andromeda) was introduced. A foldable device that represents a hybrid between smartphone and tablet. 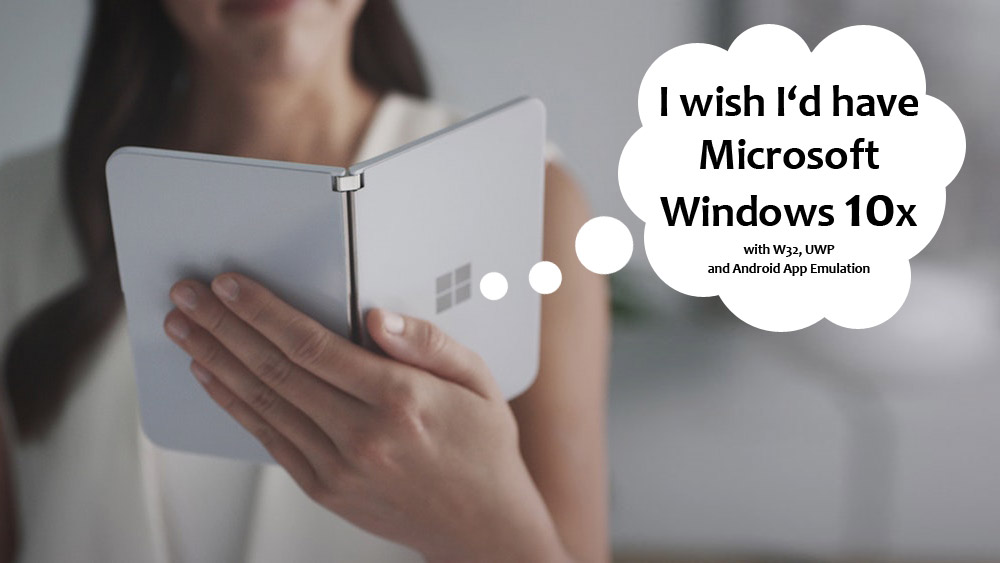 And then came the biggest disappointment you can imagine as a Windows fan:
This Surface Duo should be based on Android. Android... the operating system of Microsoft’s biggest competitor, who stands contrary to everything many of us Windows fans like and who is practically single-handedly responsible for almost all data protection problems, monopoly efforts and most of the bad things that stand against self-determination and data rights of users in general.

This is particularly bitter because Microsoft has obviously created its own operating system for the form factor presented and does not now want to use it on its own device. I simply ask myself "Is it still possible? I understand that unfortunately the App-Gap exists and you have to do something about it (but to be honest: it certainly didn’t help to retire Windows 10 (m) and put the whole thing on ice for more than 3 years... Microsoft has to grab its own nose).

The solution, of course, is to make Android apps available on the device, but why not simply as a layer for your own operating system? If it works with UWP, W32 and PWAs, why not just create an APK layer for the corresponding Android apps? There was even something similar in Ansätzung already!

That’s why there is now a petition on Change.org which demands exactly that. I would like to call upon anyone who has a problem with the progressive monopolization of the smartphone operating system market to support this petition. It is free of charge possible or you can leave of course also gladly a small donation there - completely as you mean... both helps immensely :).

Are you interested in the Surface Neo & Duo?
You can learn more about this here...